Research in Licht’s Lab focuses on understanding how dynamic interactions between Earth’s biosphere and lithosphere affect the planet’s climate and its diverse ecosystems, both of which are key drivers of sustainability. Despite modern and historical anthropogenic impacts, it is not possible to assess the complexities of global environmental change in a purely experimental fashion. Instead, we must rely upon detailed, multidisciplinary studies of key episodes in Earth history to make informed predictions about the future.
Many of our research projects focus on the Paleogene period (66-34 million years ago) because it is a period of numerous and intense climatic events that proposes interesting analogues for the on-going climate changes -with impressive shifts in atmospheric concentration in carbon dioxide, ice sheet extent and global temperature. Our projects share the common theme that they use sedimentary geology, geochemistry, and geochronology tools applied on continental rocks as proxies for reconstructing past climates and landscapes.

The tools we commonly use include:

You’ll find below a brief description of our current main research projects.

What drives the Asian monsoonal circulation?

Context: The Asian Monsoon is primarily driven by continent-ocean thermal contrasts, and frequent meteorological extreme events emphasize that it is affected by recent climate change responding to increasing atmospheric level of carbon dioxide (pCO2). The medium to longer-term effects of changes in the monsoonal system control precipitation and aridification in continental Asia and, in the past, shaped Eurasian paleoenvironments and biotic evolution. The Asian monsoons have long been thought to have originated ~23 Myr ago, driven by regional uplift. However, our recent work has shown that the monsoons are more ancient than previously thought and were possibly active with patterns similar to today during the high pCO2 Eocene Greenhouse episode. These studies open a vast array of new questions: (1) How did these early monsoons evolve through the Eocene? (2) How did they react to the numerous, short-term hyperthermal and hypothermal pCO2 events that ruled this period? We address these issues by focusing on different key sedimentary records in the Eocene monsoonal realm. Key sections in China and Myanmar are currently dated through U/Pb geochronology and magnetostratigraphy, and investigated with respect to different geochemical and mineralogical paleoclimatic proxies, such as elemental Geochemistry, clay Mineralogy, stable and clumped isotope analyses. The resulting findings will document the short- and long-term variations of the Asian monsoons during the Eocene and in light of Global Change are expected to furnish the basis for a substantial advance in our understanding of monsoonal forcing factors in a warmer world.

More about this research project: More info are available on the website of the Myanmar Paleoclimate and Geodynamics Research Group, founded and co-led by Alexis Licht.

Linking continental collisions, climate change, and past mammalian dispersions in the Middle East

Paleogene geography of the Middle East

Looking for jaws in Turkey

Context: During the Paleogene, the mammalian fossil record indicates several discrete dispersal events between Africa and Eurasia along the Tethyan Oceanic margins, some of them involving the earliest anthropoid primates. So far, the polarity, the exact timing, and the causes of these dispersal events are poorly constrained despite their critical importance in the understanding of modern mammals early radiations. This project proposes to investigate the paleogeographical and paleoenvironmental conditions that favored those dispersions by focusing on key fossiliferous sites in central Anatolia, Turkey, at the biogeographic cross-roads between Afro-Arabia, Asia, and Europe. We first aim to reconstruct the paleogeographical evolution and collision chronology in the area, and use different paleoenvironmental proxies to date and understand the past environment associated with the migrating fauna. The results may highlight the tectonic and paleoclimatic triggers leading to the Paleogene mammalian migrations and consequent radiations.

The following two research projects investigate these fundamental questions: what is the impact of mountain uplift on continental climates? Could have the uplift of several key mountain ranges and plateaus triggered the fall into the late Cenozoic Icehouse? Mountain uplift is a important driver for denudation, weathering, and organic matter burial, and provides anchors to ice-sheet. It has been hypothesized many times that the uplift of key mountain ranges could have driven global cooling on Cenozoic timescale. To test this, it is thus critical to reconstruct the global chronology of uplift. 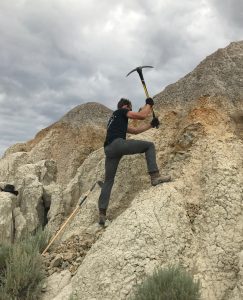 Context: Current tectonic models for the build-up of the North American cordillera suffer from limited information about the timing of topographic build-up, particularly in the Pacific Northwest. The topographic evolution in these areas remain less understood than in California, Nevada, or Utah, and have not been integrated into a broader model for orogenic development.

This project aims to document the topographic evolution of several key mountain ranges in the northernmost part of the North American cordillera to determine when was elevation attained relative to crustal deformation. It includes a vast program of stable and clumped isotopic measurements of pedogenic, lacustrine carbonates, volcanic glass, and lipid biomarkers to establish paleoelevation estimates in a temporal context by means of improved depositional ages of synorogenic deposits by U-Pb geochronology, as well as reconstruction of past fluvial drainages in the Pacific Northwest. These data will provide a new basis for interpreting the paleotopographic evolution of North America, and how it might have impacted regional climate and biota.

Southeast Asian tectonics: what makes the Himalayan-Tibetan orogen so high? 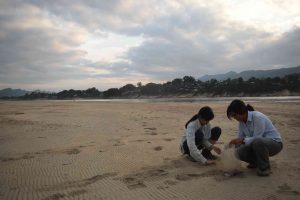 Context: The Himalayan–Tibetan orogen is commonly considered as the type orogen for continent-continent collisional systems and a natural laboratory to study the dynamics of continental collisions. Because of its immense size and elevation, numerous intracontinental and continental-margin basins, well-defined plate-boundaries, regional thrust and strike-slip systems, widespread volcanism and metamorphism, the Himalayan–Tibetan orogen has been thoroughly documented by several generations of geologists. It could have alone triggered late Cenozoic global cooling. Yet, there is still no consensus on how convergence has been accommodated since the collision between India and Eurasia.

This project aims to better explain how the convergence between the Indian and Eurasian lithospheres have been accommodated and how it relates to regional uplift. The project includes, so far, studies in three areas: Myanmar, India, and Tibet. We aim to document the structural and paleogeographic evolution of the Burmese subduction margin over the last 100 Myr and the timing of NE Tibetan uplift. These are important steps in accurately validating or rejecting end-member models for Asian lithospheric deformation and uplift and provide an unparalleled opportunity to complete the holistic model of continental convergent tectonism developed with the Himalayan–Tibetan orogen.