Alexis is a sedimentary geologist and geochronologist interested in how climate and tectonics shaped Earth’s ecosystems through time. Starting on October 1st, 2020, Alexis will leave the University of Washington, Seattle to join the CEREGE, at the University of Aix-Marseille, France. Megan is studying the evolution of the successive continental collisions in central Anatolia, Turkey, to refine our understanding of the geodynamics of subduction zones and reconstruct the paleogeography of Turkey. Her tools include U-Pb geochronology for sedimentary provenance and dating, sandstone petrography, clastic sedimentology and basin analysis.

Sam Shekut – Undergraduate (in the lab since Spring 2017) 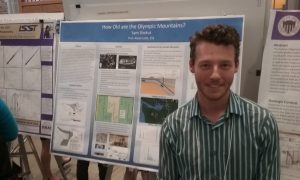 Sam works on the uplift of the Olympic Mountains, Washington, via zircon geochronology. Sam sampled rocks from around the Seattle area and studies their sedimentary provenance to reconstruct the evolution of surrounding mountains.

Ian Spendlove – Undergraduate (in the lab since Spring 2018)

Ian works on the Paleocene climate of North America, using stable isotopes and sedimentology on sedimentary rocks from the Bison Basin, Wyoming. 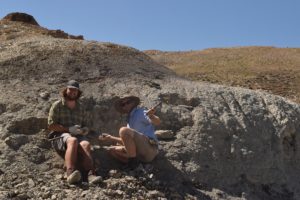 Ashika Capirala – Undergraduate (in the lab since Fall 2019)

Ashika works on paleosols from the middle Eocene of Myanmar, to reconstruct the paleoenvironments of several fossil primate-bearing sites.

Brenden Britt – Undergraduate (in the lab since Fall 2019)

Brenden works on the uplift history of the Cascades. He uses sedimentary provenance trackers on geological units on both sides of the mountain ranges to reconstruct the history of fluvial drainage across the Cascades.

Anjali Manoj – Undergraduate (in the lab since Fall 2019)

Anjali works on fossil leaves from Wyoming, dated to the middle Paleocene, to reconstruct the paleoenvironments of North America during this time (in collaboration with Alex Lowe, Biology).

Jon Rowe (Undergraduate, Fall 2018 to Summer 2020) worked on the isotopic composition of modern soils and leaves from the Cascade Range, in order to understand the evolution of rainfall and plant isotopes through orographic barriers, and apply it to paleoaltimetric reconstructions.

Derek Pierce (Undergraduate, Fall 2019 to Spring 2020) worked on intrusives from Southwest Montana in order to reconstruct the uplift and exhumation history of the North American Cordillera, using zircon geochronology and and low-temperature thermochronometers.

Kyle Lowery (Undergraduate, Fall 2017 to Spring 2018) worked on the sedimentary provenance of clastic rocks in the Koaceli Basin, northern Turkey, via zircon geochronology.

Christopher Remilly (undergraduate, Winter 2018) worked on fossil shells and gastropods from Myanmar, studying their preservation and their paleoclimatic signal.

Diana Park  (undergraduate, Spring 2017 to Summer 2018) worked on the uplift of the Indo-Burman Ranges in Myanmar, via zircon geochronology.

Mara Page (undergraduate, Spring 2017 to Summer 2018) worked on reconstructing the past summer temperatures of NE Tibet using clumped isotopes. Mara is now graduate student at the University of Michigan.

Johanna Harlé  (visiting Master Student from France, Spring 2018 to Summer 2018) worked on pedogenic carbonate from Myanmar as a tool to reconstruct past monsoonal intensity.

Andrea Hatsukami (undergraduate, Spring 2017 to Summer 2018, co-mentored with Liz Nesbitt) worked on Fossil Mollusks from the Sinop-Boyabat Region of Turkey, to reconstruct past environments there.

Hope Sisley (graduate, Winter 2017 to Winter 2019) worked on reconstructing the uplift timing of the Cascades Range, Washington State, to understand how it impacted regional aridity and fluvial drainages. Her tools included stable isotope geochemistry on leaf waxes as a proxy for paleoaltimetry and aridity.

Gui Aksit (Undergraduate Fall 2018 to Summer 2019) worked on Sedimentary rocks from Turkey in order to reconstruct the history of terrane collisions and deformation, using zircon geochronology and sandstone petrography. Gui is now graduate student at the University of Oregon.

Aida Amirah Rusman (Undergraduate, Summer 2018 to Summer 2019) worked on Sedimentary rocks from Myanmar in order to reconstruct the history of river drainage there in the geological time, using zircon geochronology and sandstone petrography.

Stokke Xu  (Undergraduate, Fall 2018 to Summer 2019) worked on Miocene rocks from Myanmar in order to reconstruct the paleoenvironments of the first grasslands of South Asia, using Stable isotopes and phytolith analysis.

Virginia Littell (Graduate student, Fall 2017 to Fall 2019) focused on tracing the intensity of the South Asian Monsoon and the paleoaltimetry of Tibet during the late Eocene. Her tools included various stable isotopic proxies applied on fossils and lignites from central Myanmar.